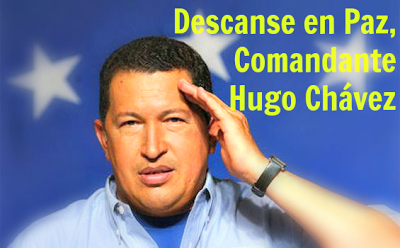 "I'll miss Hugo. When I first was introduced to him in Porto Alegre in 2003, he greeted me, "Mi padre," and said he learned a lot from me. I was dubious about this and thought he was simply buttering me up, like any two-bit politician. Then he started telling me what he learned from "Development Debacle," "Deglobalization," and "Dark Victory." I was stupefied; the guy actually read my stuff! Three years later, during the World Social Forum in Caracas, he asked me in public what I thought about what was happening in Venezuela. I took the occasion to criticize the fact that his government went back on its promise not to sign the Declaration of the World Trade Organization Ministerial Meeting in Hong Kong in December 2005, which would have led to the third collapse of a WTO ministerial, one that would have been the last nail in the coffin of that organization. "As a revolutionary, you can't go back on your word," I said. He was silent, but that was the last time I got invited to Caracas. The guy was great, but he could not take criticism. But I didn't take that personally since nobody could kick the US in the ass like he did. He did and got away with what we all wanted to do, and he entertained us in the process, with unparalleled humor. But more than that: he fought fiercely for the poor and marginalized, not only in Venezuela but in the world. Goodbye, Comandante Hugo. Wherever you are, give 'em hell." - Akbayan Rep. Walden Bello on Comandante Hugo Chavez.


"Hated by the entrenched classes, Hugo Chavez will live forever in history. My friend, rest finally in a peace long earned." — Oliver Stone, director and producer who crafted a film about Chavez and his leftist allies.

"We have lost a revolutionary, but millions of us remain inspired." - Ecuadorean President Rafael Correa, a close Chavez's ally.
Posted by monleg at 4:54 PM