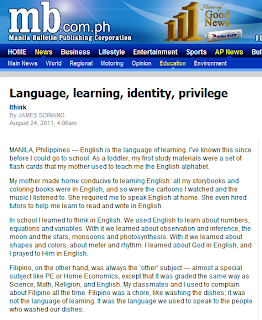 MANILA, Philippines — English is the language of learning. I’ve known this since before I could go to school. As a toddler, my first study materials were a set of flash cards that my mother used to teach me the English alphabet.

My mother made home conducive to learning English: all my storybooks and coloring books were in English, and so were the cartoons I watched and the music I listened to. She required me to speak English at home. She even hired tutors to help me learn to read and write in English.


Filipino, on the other hand, was always the ‘other’ subject — almost a special subject like PE or Home Economics, except that it was graded the same way as Science, Math, Religion, and English. My classmates and I used to complain about Filipino all the time. Filipino was a chore, like washing the dishes; it was not the language of learning. It was the language we used to speak to the people who washed our dishes.

We used to think learning Filipino was important because it was practical: Filipino was the language of the world outside the classroom. It was the language of the streets: it was how you spoke to the tindera when you went to the tindahan, what you used to tell your katulong that you had an utos, and how you texted manong when you needed “sundo na.”

These skills were required to survive in the outside world, because we are forced to relate with the tinderas and the manongs and the katulongs of this world. If we wanted to communicate to these people — or otherwise avoid being mugged on the jeepney — we needed to learn Filipino.

That being said though, I was proud of my proficiency with the language. Filipino was the language I used to speak with my cousins and uncles and grandparents in the province, so I never had much trouble reciting.

It was the reading and writing that was tedious and difficult. I spoke Filipino, but only when I was in a different world like the streets or the province; it did not come naturally to me. English was more natural; I read, wrote and thought in English. And so, in much of the same way that I learned German later on, I learned Filipino in terms of English. In this way I survived Filipino in high school, albeit with too many sentences that had the preposition ‘ay.’

It was really only in university that I began to grasp Filipino in terms of language and not just dialect. Filipino was not merely a peculiar variety of language, derived and continuously borrowing from the English and Spanish alphabets; it was its own system, with its own grammar, semantics, sounds, even symbols.

But more significantly, it was its own way of reading, writing, and thinking. There are ideas and concepts unique to Filipino that can never be translated into another. Try translating bayanihan, tagay, kilig or diskarte.
Only recently have I begun to grasp Filipino as the language of identity: the language of emotion, experience, and even of learning. And with this comes the realization that I do, in fact, smell worse than a malansang isda. My own language is foreign to me: I speak, think, read and write primarily in English. To borrow the terminology of Fr. Bulatao, I am a split-level Filipino.

So I have my education to thank for making English my mother language.
Posted by monleg at 6:02 PM